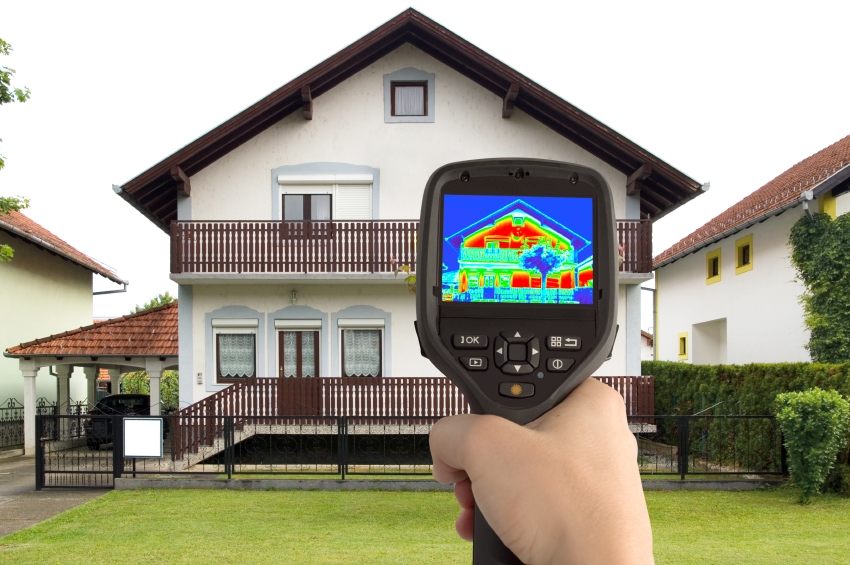 Energy auditors may use thermography — or infrared scanning — to detect thermal defects and air leakage in building envelopes.

Thermography measures surface temperatures by using infrared video and still cameras. These tools see light that is in the heat spectrum. Images on the video or film record the temperature variations of the building’s skin, ranging from white for warm regions to black for cooler areas. The resulting images help the auditor determine whether insulation is needed. They also serve as a quality control tool, to ensure that insulation has been installed correctly. For more on how infrared imaging works, check out our Energy Saver 101 infographic on home energy audits.

A thermographic inspection is either an interior or exterior survey. The energy auditor decides which method would give the best results under certain weather conditions. Interior scans are more common, because warm air escaping from a building does not always move through the walls in a straight line. Heat loss detected in one area of the outside wall might originate at some other location on the inside of the wall. Also, it is harder to detect temperature differences on the outside surface of the building during windy weather. Because of this difficulty, interior surveys are generally more accurate because they benefit from reduced air movement.

Infrared scanning allows energy auditors to check the effectiveness of insulation in a building’s construction. The resulting thermograms help auditors determine whether a building needs insulation and where in the building it should go. Because wet insulation conducts heat faster than dry insulation, thermographic scans of roofs can often detect roof leaks.

In addition to using thermography during an energy assessment, you should have a scan done before purchasing a house; even new houses can have defects in their thermal envelopes. You may wish to include a clause in the contract requiring a thermographic scan of the house. A thermographic scan performed by a certified technician is usually accurate enough to use as documentation in court proceedings.

The energy auditor may use one of several types of infrared sensing devices in an on-site inspection.

A spot radiometer (also called a point radiometer) is the simplest. It measures radiation one spot at a time, with a simple meter reading showing the temperature of a given spot. The auditor pans the area with the device and notes the differences in temperature.

A thermal line scanner shows radiant temperature viewed along a line. The thermogram shows the line scan superimposed over a picture of the panned area. This process shows temperature variations along the line.

The most accurate thermographic inspection device is a thermal imaging camera, which produces a 2-dimensional thermal picture of an area showing heat leakage. Spot radiometers and thermal line scanners do not provide the necessary detail for a complete home energy assessment. Infrared film used in a conventional camera is not sensitive enough to detect heat loss.

PREPARING FOR A THERMOGRAPHIC INSPECTION

To prepare for an interior thermal scan, the homeowner should take steps to ensure an accurate result. This may include moving furniture away from exterior walls and removing drapes. The most accurate thermographic images usually occur when there is a large temperature difference (at least 20°F [14°C]) between inside and outside air temperatures. In northern states, thermographic scans are generally done in the winter. In southern states, however, scans are usually conducted during warm weather with the air conditioner on.

Some times of the year, because of a phenomenon known as “thermal loading,” it might be necessary for the homeowner–depending on local conditions–to create and maintain a specific inside/outside temperature difference for a period of up to four hours before the test will be performed. Running the air conditioner in cooling climates or the central heat in heating climates can do this. Ask the auditor prior to the test if this will be necessary.